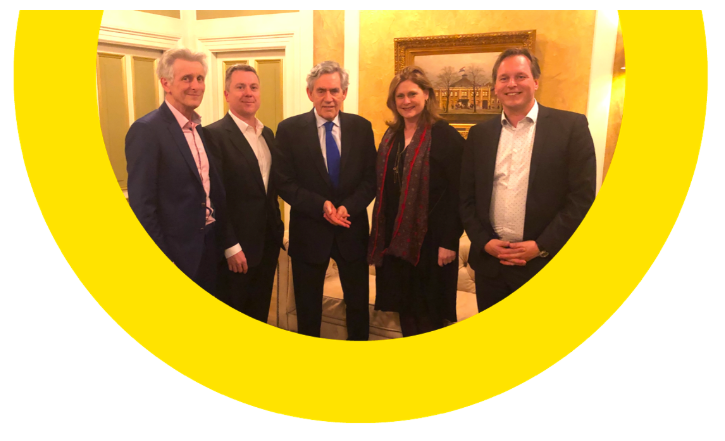 Gordon Brown: “When will they ever learn?”

“What is it with global leaders that distracts them from the topics that really matter? When will they ever learn?”.

Former UK Prime Minister Gordon Brown was on fire speeching for a crammed Amsterdam Carre audience. As Special Envoy for the UN on Education he showed and told about hundreds of striking, moving pictures that all accentuated what was also Nelson Mandela’s paramount concern: “Education is the most powerful weapon which we can use to change the world.” Gordon Brown brought it with such a rare eloquent power that the audience gave him a standing ovation. Right before his speech Brown, together with his wife Sarah, took ample time to discuss with WakaWaka representatives Richard Currie, Camille van Gestel and Maurits Groen the strong links between (solar) light, education, girls and reversing the effects of climate disruption. We found mutual goals and reasons to cooperate with this passionate storyteller. 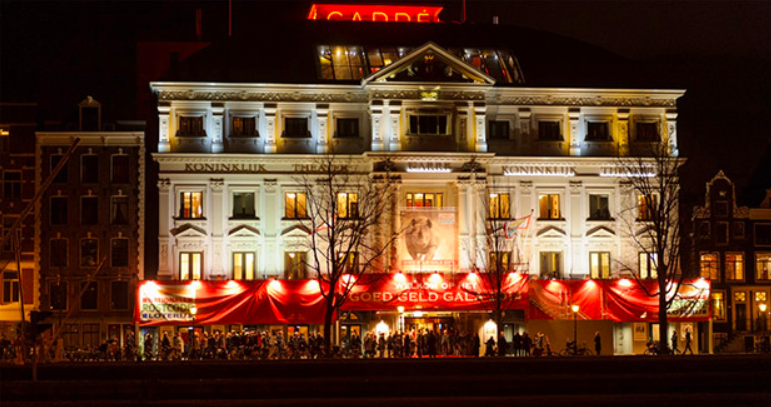 Setting the stage
Monday evening in The Netherlands. Hundreds gather, all dressed up, hair done, shoes polished, at the royal theatre Carre in the heart of Amsterdam. Not for the latest comedy performance by Youp van ‘t Hek, or the renown World Christmas Circus, but for something completely different. The “Goed Geld Gala” (freely translated to: Well Spent Money Gala) from the Dutch Postcode Lottery. The hundred or so non-profit organizations represented and seated in front of the stage, are about to have some three hundred seventy million Euro’s poured into their missions-for-good. The Postcode Lottery is one of the largest charitable organizations in the world today, having donated well over ten billion Euro’s since it was founded by Boudewijn Poelmann in 1989. Keynote this year was by His Lordship Gordon Brown, following inspirational speakers such a Leonardo di Caprio and President Bill Clinton. The audience was a bit spoiled already to begin with, so no easy task here for Gordon Brown.

A horror story in Carre
Gordon is aware of the fact that politicians aren’t always the greatest of storytellers and have a tendency to use way too many words. He’s familiar with the term “a picture says more than a thousand words” and decided to act on this. So instead of submerging the audience in hundreds of thousands of words, he fires away with a series of pictures, carefully selected to illustrate the message he wants to share with us. And it isn’t all pretty… in order to set the stage for his own story, he blasts off with a World Press Photo known to all about the girl in Vietnam running away from a napalm strike. And he pushed forward in shocking the audience with pictures that remind us of what we said several times in our history: “never again!” and decades or some times just years later, history repeats itself once again. Today, in 2019, we live in a world with 75 million children living in conflict affected areas. Only 1 in a 100 will get to college or university.

Astronauts and McDonalds
After shaking everyone up and reminding us of how incredibly stubborn, or rather ignorant we can be as a human species, the story takes a turn and turns towards hope. For hope Gordon looks towards outer space and the human collaborations that apparently are possible out there. There where life is only possible in a carefully protected environment with only a handful of people, it appears to be irrelevant what people’s backgrounds are. Collaboration is vital for survival and thus it seems to work. 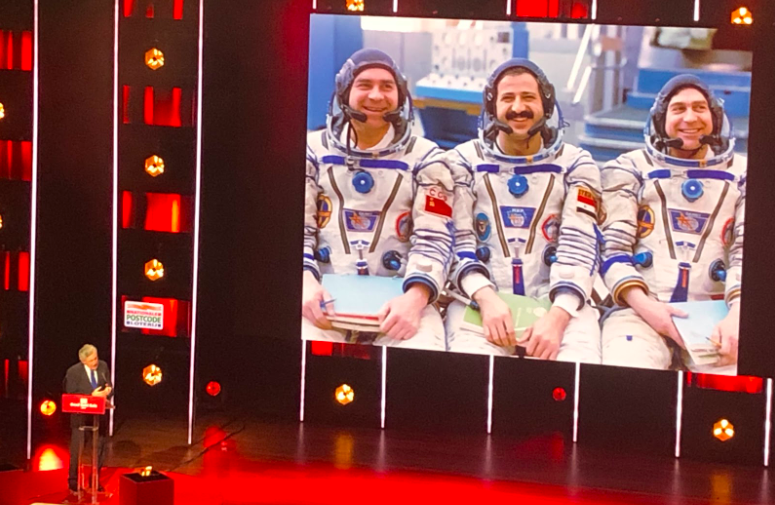 Down on earth though, one of these astronauts, the first Syrian astronaut, can’t even find a school that isn’t shattered by the war in his country. Nevertheless, the astronaut brings hope that collaboration isn’t only possible, but vital to our coexistence. Gordons camera now shifts to the Philippines to Daniel Cabrera, who at the age of 9 was doing his homework outside, under the outdoor lights of a local McDonalds. The picture went viral and the homeless boy, so determined to get his homework done, touched the hearts of millions. Donations from around the world enabled him to get an education and he can now pursue his dream of becoming a policeman one day. 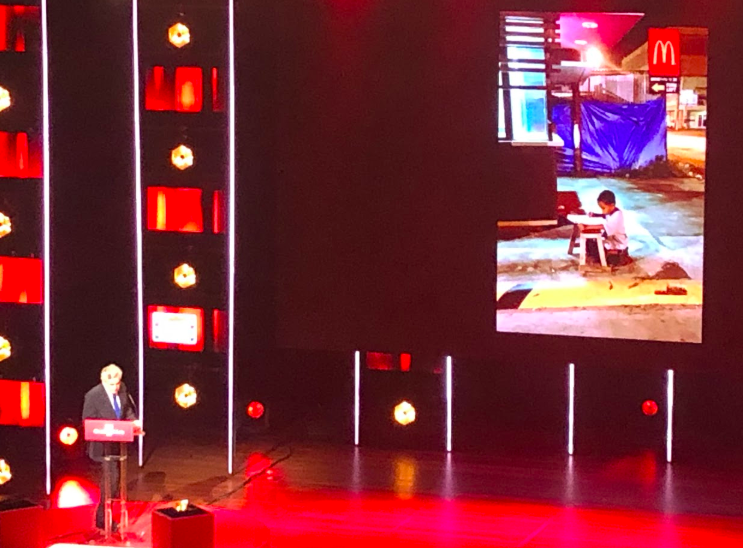 200 million
No, this number does not refer to another special surprise grant of the Postcode Lottery, but rather to the number of children who still won’t be in school by 2030… if we continue with ‘business as usual’ and if we’re not allocating more resources to education. Having an education is everyone’s birthright, no matter where you were born, regardless of your predicament, rich or poor. Without an education, how fair are the chances that a boy or girl will be able to sustain his or her life without support? The predictions for 2030 aren’t fancy… on top of the 200 million without education, there are expected to be 400 million children who won’t make it till secondary education and a number even twice as high are the number of children who drop-out of school without qualifications. Can we blame the children for this? Of course not! “We are betraying half of the world’s children”, Gordon says.

Girls, girls, girls
Education for girls and boys is pretty much the same in Europe, in the United States and many other western countries. But that was certainly not always the case. Womens’ rights and rights for girls have developed gradually over the decades of the last century. There are still many parts of the world where the rights for women and girls are everything but equal to those of men and boys. Gordon has shown us several examples of girls who were married off at an age we would not let our own daughters go out on a date yet. Futures are shattered to pieces this way and great potential is lost, before it ever got a chance to flourish to fruition. The key to change can be found in education again. If girls become aware of their reproductive rights and reproductive health, they can speak up. If not for themselves, perhaps for their daughters, or someone else’s daughter. The impact on families, on communities, and even whole nations cannot be underestimated. Fortunately there are girl heroes who dare to stand up, even after being shot by the Taliban, like Malala Yousafzai, the youngest Nobel Peace laureate ever. She dares to defy the powers that be and demands education for all girls not only in her home country Pakistan, but for all girls globally.

Unexpected twist to the story
Earlier that evening we had a chance to speak to Gordon and his wife Sarah, who is the founder and chair of UK children’s Charity Theirworld.org as well as Executive Chair for the Global Business Coalition for Education. WakaWaka was clearly in good company with Gordon and Sarah. You’d might expect that there would be not much or nothing at all that we could tell them about global education or the importance of it for that matter, but … stubborn and bold as we are sometimes, we figured we’d take a stab at sharing an interesting insight we only recently learned about ourselves…

After elaborating about exciting new projects WakaWaka is doing with the Dutch Postcode Lottery and disclosing some even bolder plans we have for the near future (suspense… stay tuned for more…) we shared the research project that was published in the book DrawDown. The project is turned into a list of 100 concrete, feasible and affordable solutions to – please pay attention – REVERSE the effects of climate disruption by decreasing carbon concentrations in the atmosphere. The point where that starts to happen, is called “drawdown”.

It appears that electric vehicles, rooftop solar and sustainable air travel didn’t even make it to the top 20 solutions… So what did? When we thought that proper disposal of cooling liquids was a mindblowing solution (eight times more effective than electric vehicles), we fell off our chairs when we learned what the effects on climate disruption were by educating girls.

Education empowers a generation and saves the planet
Actually it is not so hard to grasp when realizing a few things we normally don’t spend too much time thinking about. It is women who contribute most to a rural households income. They are the forces of nature in global, rural agriculture. But women are also the first victims of an unequal society where they need to nurture their children, many of which were not planned due to lack of contraceptives, but more importantly due to lack of education on their reproductive human rights. The research by DrawDown shows us that a girl with at least 12 years of education is likely to have four to five fewer children than a girl who did not have the possibility to use this most basic of human rights: education. By 2050 this could potentially result in a difference of around one billion people, or 10% of our global population by then. 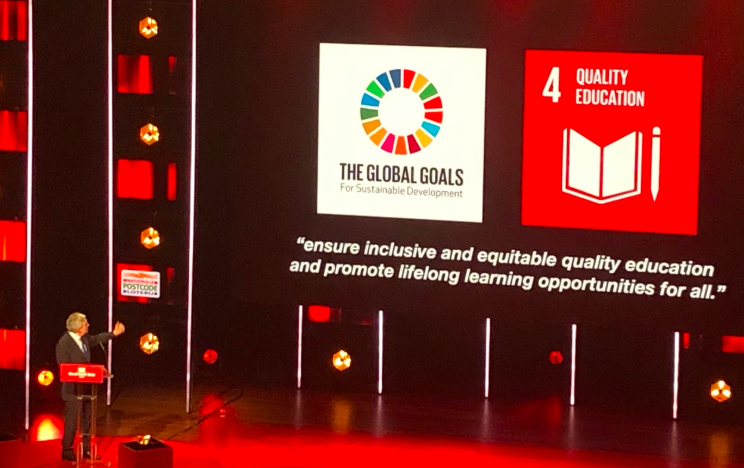 Do we always need a reason?
There are dozens of reasons why we, as a society, need to make education accessible to all. That is also why it is a Sustainable Development Goal (#4). There are even more reasons why girls specifically need to have the education they’re entitled to. So we should not have to use climate disruption as an excuse, or a reason to invest more in educating for girls. But we don’t need to ignore it either. The effect of educating girls turns out to the #1 most effective solution in helping to reach the drawdown point. The point in time when we can hopefully start restoring our planet again. Education and educating girls is necessary. We cannot do without. So whether we need a reason or an excuse, that is actually irrelevant. It needs to be done. Simply because we have to. 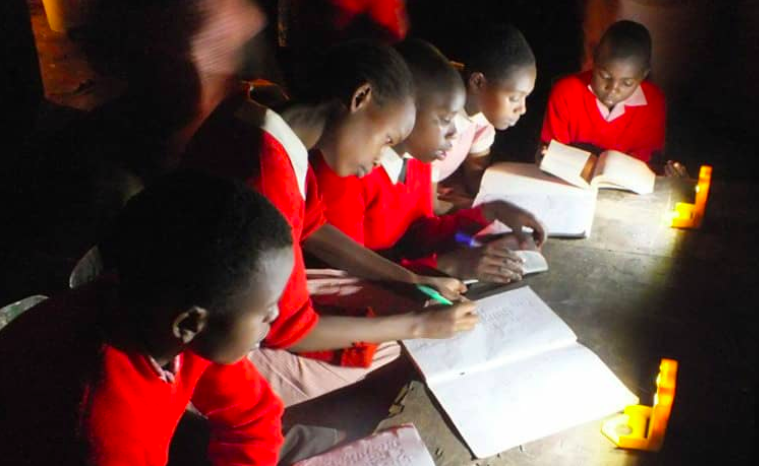 Light the way
Education is not possible without light in the evening for doing homework and there are not enough McDonalds restaurants in the world to provide every student with proper reading light. School results improve dramatically when students have access to a safe, sustainable source of light. Gordon Browns passionate story about the dire need for universal access to education was a very powerful way of illustrating what this all leads to, what the unlocked potential is for humanity. As a former politician and the UN’s special envoy for Education, he is ideally positioned to wake up and shake up global leaders and make them turn their heads to solving a problem that is not nearly as complicated as putting a man on the moon, now 50 years ago. WakaWaka will light up the path, but rather books and students around the world, wherever possible and necessary.

There’s no time to waste, there’s enlightenment to be spread and dreams to be fulfilled. We are all part of the solution. Simply because we have to.