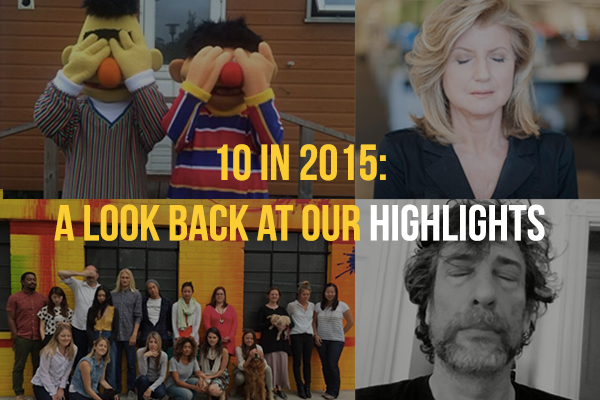 A Look Back at Our Highlights in 2015

As we prepare to usher in 2016, here is a look back at some highlights of the many things we were able to accomplish with the help of our amazing community (that’s you!) this past year:

2. We were #allaboutthebase. We launched — and promptly sold out of — the WakaWaka Base, the evolution of portable solar power. The ultimate all-in-one compact first-aid kit for every house, car or adventure, the Base is a must-have when the sun goes down and the lights go out.

3. We mobilized quickly for Nepal. In April 2015 a massive earthquake hit central Nepal. With thousands believed dead and enormous destruction, the entire country plunged into darkness. Within days our Agents of Light mobilized to raise over 15,000 solar flashlights and chargers that were dispatched to help Nepali families as they work to rebuild their lives and country.

4. We brought the innovation to the Consumer Electronics Show. We were proud winners of the prestigious CES Innovation Awards honoring outstanding design and engineering in consumer technology for not one but two of our premium portable solar products: The WakaWaka Power+ and the WakaWaka Base. We met — and surpassed — the goal of our uber-successful crowdfunding campaign, You Can’t Fight Ebola in the Dark (which was the first-ever LIVE crowdfunding effort right on the CES show floor).

5. We closed our eyes in solidarity for World Refugee Day. Close your eyes and imagine what it would be like to live in pitch black, night after night. For World Refugee Day this past June, we asked people to post a picture with eyes closed in support of the 60 million refugees and displaced persons worldwide. Reaching more than a million people around the world, the wildly successful social media campaign drew the support of WakaWaka fans and Agents of Light from around the world, including entrepreneur Arianna Huffington, author Neil Gaiman, actor/director Rose McGowan, TOMS shoes, Sesame Street’s Bert and Ernie, (and even a handful of socially conscious dogs, cats and babies!).

6. We successfully piloted the Virtual Grid. In the most remote areas of Rwanda, we piloted the WakaWaka Virtual Grid, a pay-as-you-go, lease-to-own model. For as little as 75 cents a week, so-called base-of-the-pyramid consumers can afford our premium, sustainable and super-efficient solar flashlights and chargers. Our hope is that the Virtual Grid will leapfrog the need for a traditional electric grid.

7. We sent our greetings from Dubai! Our CEO, Jehmu Greene, and co-founder, Camille van Gestel, spoke at the 4th International Off-Grid Lighting conference, launched to chart the route to improved energy access. “We’re all agents of light: everyone involved in giving and receiving off-grid products,” said Jehmu in her address to conference attendees on two panels related to social impact metrics and humanitarian aid. Jehmu spoke about our unique Share the Sun model and the important lessons we have learned in our work in off-grid communities. It is often said that a “rising tide lifts all boats” and we are immensely proud of WakaWaka’s leadership in helping to build awareness around the issue of energy poverty and the important contributions our company has made in the rapidly growing off-grid solar lighting and services industry.

8. We shared the sun with Syrian Refugees on #GivingTuesday. Syrian refugees have endured nearly five years of loss, devastation and terror. On Giving Tuesday, we urged our Agents of Light to donate to the International Rescue Committee (IRC) to help make the lives of families caught in crisis a bit brighter and to support the IRC’s efforts to bring over 60 million refugees from harm to home.

9. We welcomed new management. As WakaWaka redoubled its efforts to scale up, we found ourselves in need of new leadership to guide the company toward new opportunities, partnerships and innovations. After four years of running WakaWaka, our tireless co-founders Maurits Groen and Camille van Gestel decided to step down as co-CEOs and hand over the operational reins to a new management team. Jehmu Greene, WakaWaka North America President, stepped up to serve as Interim CEO, joined by new CTO, Raouf Saidi, and new CFO, Carolien Verburg.

10. And finally … We were most sustainable! In October Dutch newspaper Trouw unveiled its list of the 100 most sustainable people in the Netherlands. And landing in the number one spot was our very own WakaWaka co-founder, Maurits Groen, in the fabulous company of some of the world’s most notable names in sustainability.

Here’s to another year of clean, safe, sustainable light and to a year of even greater impact.

Thank you, wonderful Agents of Light.