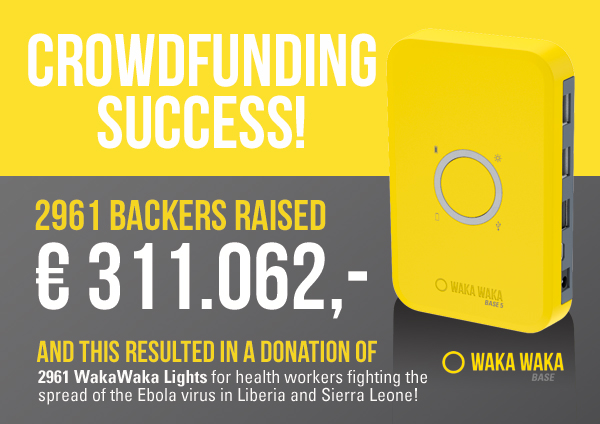 Last month WakaWaka launched Kickstarter (international) and OnePlanetCrowd (Netherlands) campaigns to fund the product development of a portable solar power kit for when the lights go out. Within two days The ‘WakaWaka Base’  surpassed $140,000 on Kickstarter and €30,000 on OnePlanetCrowd. After 30 days both campaigns

The WakaWaka Base (the Base) is intended for everyone who hates to be out of power.  In the event of an emergency or disaster, the 5,000 or 10,000 mAh capacity – enough for multiple smart phone charges or an entire week of light – is a necessity for every home.

The power grid is becoming less reliable, with power outages now taking 20% longer to fix. Living at the mercy of the grid, each day millions of people are left in the dark without power. Having raised nearly $500,000 in its previous campaign, WakaWaka is a Kickstarter success story. Backers of the current campaign will also help bring power and light to families living in the dark around the world. When you buy one, WakaWaka gives one.

WakaWaka’s mission is to use the power of the sun to unite and empower people to light their world. We believe that everyone, regardless of age, position, or predicament, has the ability to be an agent of light that can spark positive change.

For more information, visit Kickstarter or OnePlanetCrowd. High-resolution photos of the Base and more information on WakaWaka’s impact around the world can be found in our press kit.