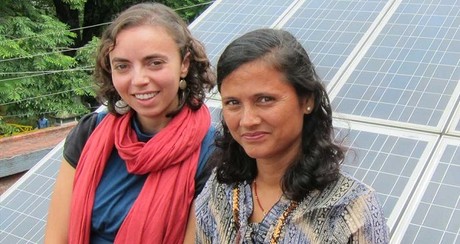 It’s also the principle that keeps them pushing the solution to energy poverty and human trafficking which is rife in Nepal. Empower Generation is aiming to give women extensive technical training and support, as well as helping them establish small to medium-sized clean energy companies that are able to provide renewable technologies to their customers.

What’s more, they are providing cleantech suppliers with a distribution channel within markets that require these all important clean energy products, which are managed by well-trained local women. This innovative business model provides the local people with their own sustainable system that not only provides employment, but also empowers women to do greater things and while giving them clean energy to use in their homes.

Empower Generation came about because of the intense passion of Anya Cherneff (pictured above) and her husband Bennett Cohen, who co-founded the organization. Anya had been working in the non-profit sector, which initially exposed her to these problems in Nepal. Her husband, however, had previously worked in the energy sector and was inspired to help the poor through the use of cleantech. Bennett said:

“We asked ourselves, ‘Could we create something positive that combines our passions?’”

The inspiration they received to both solve energy poverty and the problem of human trafficking developed into a six-month trip to some of the poorest places on the planet. When they visited Nepal, they experienced the huge challenges of energy poverty firsthand, when hotels didn’t even have power, heat or light. Bennett continued:

“Energy poverty is not just about one really, really poor person without light; it effects the whole country and makes it hard for people to feel hopeful to change their situation.”

So this is where Empower Generation was born. It became a tool to empower women and to help them fight back against human slavery.

“We chose a market-based clean energy solution because human trafficking is a horrendous by-product of gender inequality. Providing women with their own earning and spending power within their home is the best way to ensure they are not forced into prostitution or labour.”

Instead of just turning to financial donations, however, the goal for Empower Generation became to make the work they do entirely self-sustaining. “True empowerment is giving people the tools they need to lead their own destiny.”

As a result of this, a unique sustainable project came about, instead of just a system of financial donations. The solution focuses on created cleantech enterprises that are focused on ensuring that women were empowered, with the aim to create small to medium sized businesses. “We support women-led clean energy enterprises,” explains Anya. “We want our entrepreneurs to be the leaders of the clean energy revolution and to become strong, independent businesswomen who run their local distribution network on their own.”

The Empower Generation project began by finding women who had strong local reputations for being popular leaders, which is the ideal way to begin getting cleantech products into the hands of women in the area, and people in general, who needed them. The team behind the project began researching the community to find groups that were suffering the most from the energy poverty problem. They then met with local organizations to talk about the issue, and from there, these local groups began inviting people to join the network for Empower Generation, EmpowerGrid.

The initial support for the project began with workforce training, access to capital, development of the business plan and feasibility studies, along with marketing support. The team at Empower Generation has been emphasizing the importance of training people at all levels of the supply chain. This includes the sales agents, repair technicians and entrepreneurs.

“We support women-led clean energy enterprises,” explains Anya. “We want our entrepreneurs to be the leaders of the clean energy revolution and to become strong, independent businesswomen who run their local distribution network on their own.”

Creating a Renewable Energy Company that is Self-Sustaining

All of Empower Generation’s efforts are supported by their sustainable business model, which has three different income streams. These include the distribution network fees paid by companies like WakaWaka to receive assistance with import regulations as well as access to market in Nepal.

The second income stream is derived from sales made by individual cleantech enterprises. These enterprises learn to create their own income through their sales, which eventually become self-sustaining. To this end, the businesses are required to set prices that can provide them with some level of profit.

“We have to encourage them to do so; otherwise they worry that they’ll be shutting out the people they are really trying to help.”

It’s this requirement of payment, rather than just giving it away for free that allows local people to actually sustain themselves for the future.

“People value what they pay for or earn a lot more than what they are given. To end the negative cycles of aid dependency, we listen to what communities really want and then provide the tools they need – in this case understanding, access to products, and capital – so they generate their own wave of community change.”

One of the entrepreneurs who benefits from these online WakaWaka Power sales is Pabitra. “We thought it would be cool to give our supporters in the US a chance to use the same great tech we are bringing to Nepal, so we’re happy to have a great partner like OGS while raising funds for our work.  Our goal was to sell 200 WakaWaka Power units in the US last month.  We are only eight units from our goal.”

The partnership has become so successful for Empower Generation that now there are even plans being finalized to expand the program into allowing for the organization to work with many more female entrepreneurs throughout the area.

The goal for Empower Generation is to create large, female-owned businesses that don’t just employ a few, but instead dozens of individuals who work at selling thousands of different energy efficient products each year, instead of just a few hundred. This means that the impact on the local area is much greater than it would be through simple donations and charity work.

“It’s easier to ensure profitability of a few businesses led by strong women, than to lend out a bunch of lights in a bag and hope that all of them sell and decide to come back for more. We think that it’s important to create larger enterprises that can support sales agents themselves, so that the distribution chain is not reliant on outside influences forever.”

As a result, it’s a priority to ensure that there are much larger start-up loans available to entrepreneurs, than if they were to buy just a few WakaWaka solar lights. The approach to providing real finance to cover the cost of starting up a serious business means that real success and change can be made. These start-ups require IT equipment, training, expansion capitals and general operating costs if they are to actually make an impact.

Empower Generation has much bigger plans, though. The plan is now to expand much further than Nepal, and the organization is now looking to take this successful model to other developing markets in Asia that are suffering with energy poverty. Research is also being planned for places like Indonesia, the Philippines and Burma.

“Providing women with knowledge and understanding about the purveying issues that affect their lives and their communities, and the tools to bring their communities out of energy poverty, will allow the whole society to see women, as they lead their neighbours out of the energy poverty darkness, as strong leaders who are valuable and should be treated as such.”